One thing that I have struggled with is testing an assembly in the editor with a specific credential set that isnt the default. Unless you hard code the credentials in any subassembly/module it will use the default.

What I would like is a drop down or something on each assembly/module within the assembly editor that allows you to select the credentials to be used for that run and those credentials carry to any subassembly.

I know the workaround is to change the default credentials every time but i think it would be much more beneficial to testing if you could simply select the credentials you wanted to use and run.

To test assemblies in the assembly editor against customer accounts, the technique we use is the Switch Account functionality. You have to first perform the Switch, then load the assembly into the editor. The editor uses the credentials for the account active at the time when a diagram is opened.

This is much easier than having to edit assemblies like you suggest to pick a non-default account everywhere where needed just for testing. Plus it is easy to forget to change selected accounts back to use the default when done testing, especially for complex integrations with many subassemblies.

i dont mean to permanently change. I mean to simply select in the assembly and when testing there it uses those same credentials throughout any nested sub-assemblies, similar to how the automation editor works. you select credentials on the action and it carries through the entire action and to all the sub-assemblies.

Right now it wont carry anything past a single level (and thats if i design it to pass through that way). perfect world, it would work like the automation editor and carry through all nested modules

Will make a note about being able to select a non-default account to use for a future system release.

For now the recommended approach is to use the Switch Account functionality, which does use the selected account’s default credentials for all nested subassemblies as the main assembly executes. Just remember to switch first before opening the assembly to be tested.

Wanted to let you know that the forthcoming system release now has the ability to pick an account to use when testing trigger, action, and subassembly diagrams for an app: 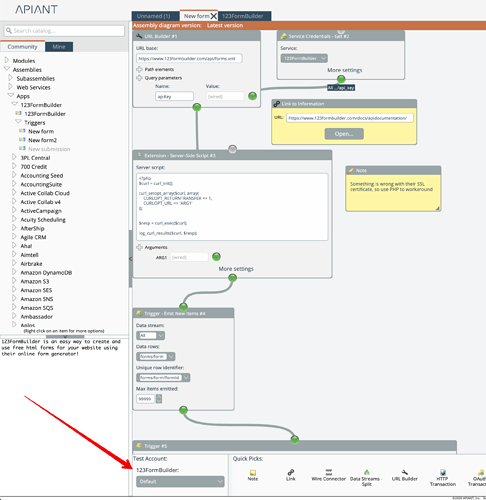 Expecting the new release to be ready in about a week or so.

That is fantastic. That would help so much when testing. Thanks