When setting up a new connection, it will prompt first with the name to save the credential under.

If i wanted to create a new connection outside of that process, say through another automation, how would i name it like that? I assume its just a specific value under the service credentials - save

The Service Credentials - Save module expects to be provided the connection name via the automation editor. So you can’t use that module outside of the app connection assembly to create connections other than the Default connection for the account running the assembly.

To be able to save a named connection outside of the automation editor would require using the Keyvalue Storage INSERT module like this: 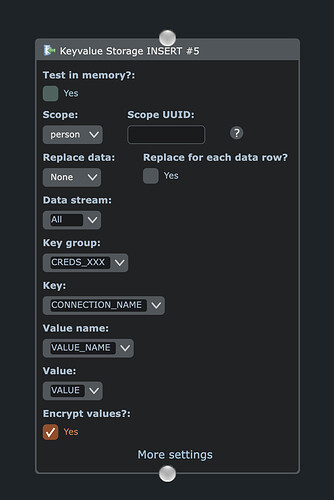 For CONNECTION_NAME, the first connection must always be named “Default”. Subsequent connections can have any name.

The VALUE_NAME will be the name of the value to store, e.g. “api_key”.

The VALUE will be encrypted. The “encrypt values” checkbox must be checked.

We actually haven’t had anyone try to create a connection in an automated fashion outside of the automation editor, but this should work. Let us know if you hit any trouble!

im trying to future plan for an avalara automation package we are working on and had ideas for things i wanted to try. my thought is if i can set it up so they install a package inside intacct, they setup their credentials (it validates them then saves them), then on every automation call it passes the credentials through to be used.

just trying each step first to prove the concept