I wanted to set a filter on the trigger but when i try to save, all the intacct assemblies are saying mismatched account. I check all of them but they are all the same except for the very first intacct action which doesnt give me the option to select the account to use.

I tried removing it and entering it again, no go.

Any idea what is going on there?

The new system version installed over the weekend has caught what is likely an error with your existing automation.

While troubleshooting this I observed that the UI was not allowing a different account to be selected from a dropdown list in action #2. I have patched your system so it will show now. Clear your browser cache and reload the automation editor to get the patch.

So in all likelihood you want to edit the automation and change action #2 to also use the “LBK LTD” account. If for some reason that is not the desired logic, you can leave it set to Default and save the automation.

thats the problem. they were all LBK LTD. i went into it now and that single action wont allow me to set any other accounts. the pick list isnt even there to select from 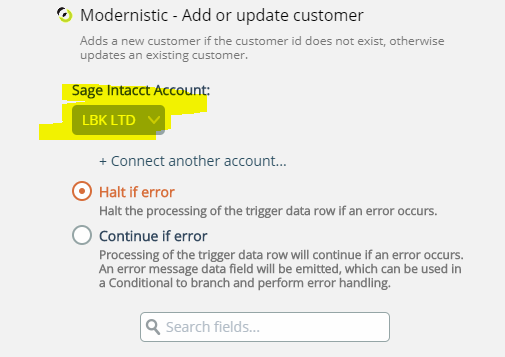 Clear your browser cache and reload the editor, the pick list appears for me in action #2.