I was thinking about the “checkbox” module to filter or emit data in automation. Let me explain you the requirement in short.

Suppose we’ve got a trigger for an application and that trigger has numbers of fields (380+ fields) for a single record and out of those 20-30 fields are useful (which need to be a map in action assembly). Application API allows us to mention only fields which are required but I don’t want to do that because it would make assembly private. Here what I want:

I want to get all those fields to get through the ‘checkbox’ module and all the fields will appear in automation while configuring the trigger. Now I have the ability to check/uncheck those fields which need to be pass in API query. Something like that:

Let me know if I’m asking for right things or if it’s possible by any of the modules or assembly to improve the performance of the connector.

Sorry, this doesn’t make any sense to me. What is the problem you want to solve?

we’ve an trigger assembly for DonorPerfect (Dev: dd07718a709045ad8bcb055c43a39616) which is working perfect and it’s specific to the customer, now they want new enhancement to pull other table data along with donor record. I’ve contacted with Donor support team to get API query, they helped me but asked me to throttle API response with limited fields. As I mentioned before, API query response with 380+ fields just for one records and most of them not useful. I want to pass all the fields but can be exclude in automation while configuring trigger. For example the query we’re passing currently in API:

Currently there is a “Multi-Input Parameter” module that allows entering multiple items, so you would have to type in the field names instead of being able to pick them from a list. See assembly 5cd93c2a153d42c58c7b43cbd76781e0 in dev.apiant, which uses this control.

Thanks for the understanding and guidance. I’ll try this.

FYI, a new multi-select parameter module has been added for the next release that will do as you initially described: 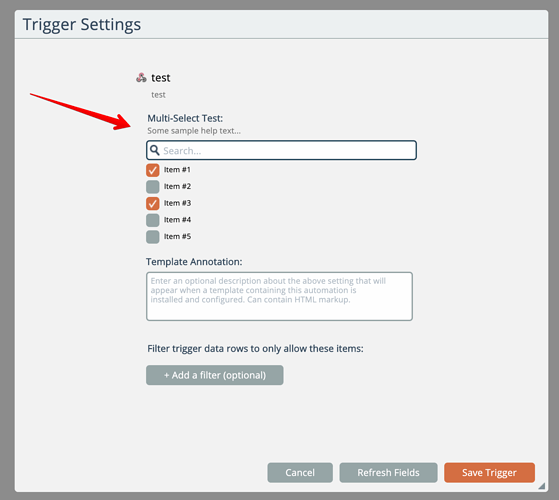 The new release is probably two weeks away.

Nice! Is it available to use or have to wait for release?

I plan to install the new release into dev.apiant soon, hopefully in the next day or so.

But the new release is not compatible with other systems that aren’t yet upgraded, so I will lock the dev.apiant system so no content can be exported from it.

Understood, thanks for everything.

The new multi-select parameter module is available in the new system release:

Your devops needs to reboot the system twice after installing this upgrade. They need to wait until an error message appears in catalina.out before the second reboot.