On assignment 109, when I try to add a connection in the automation editor to Twitter, I see this message:

I did get some keys for my Twitter app (which I named BSwit_test_app), put them in my empty.keys file, and successfully uploaded them to my keyvault. By the way, I uncommented the account element, and included a / to close out the account element.

OAuth API keys are loaded in the Twitter assembly here:

This assembly is configured to use the OAuth keys for the author of the assembly, which in this case is the admin account. Since the admin account’s keyvault doesn’t contain the API keys, the error is displayed.

Sorry, the training assignment was written long before the logic for keyvault access was revised. It’s good to have learned about this, though.

OK, I think I made some progress on this. In the Assembly Editor, I saved a copy of the Twitter app as Twitter-Ben. I then placed an Action module in the Assembly, but did not modify the module or connect it to anything else. This assembly auto-saves, but when I try to manually save the assembly, I receive the following message:

I did try to Connect an App in the Automation Editor. I search for Twitter-Ben and found it. I selected Twitter-Ben, but I received the following message:

Sorry, this app is not yet available. You can either add the app yourself using the Assembly Writing Editor, or submit your request below.

How should I proceed to complete Assignment 109?

You don’t need to modify any assembly. Save a copy of the Twitter app assembly with a new name. Then open an existing Twitter action or trigger assembly and save a copy. In the save dialog choose your new Twitter app so that the copied action/trigger is associated with your new Twitter app. Then you should be able to connect in the automation editor. 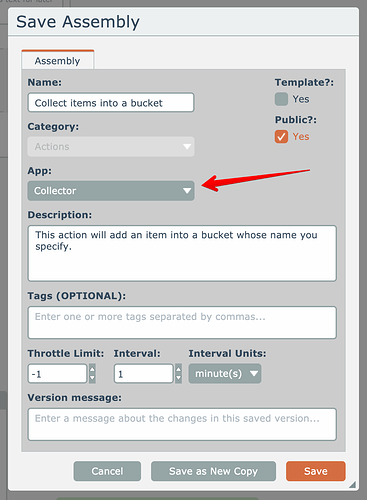 OK! It seems like I completed assignment 109. I got a message in that popup window with a success message.

Would it be possible for you to walk me through, say, posting a new tweet through Apiant somehow? I guess that could be assignment 501? 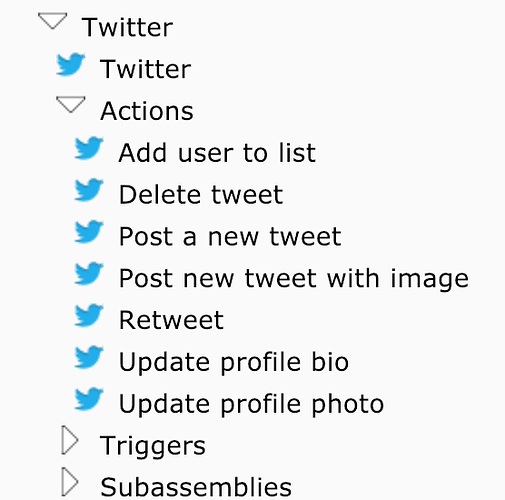