With the exception of the cadence, is there any customization that can be done to the alert emails? changing the subject? adding in anything in particular to the body? additional CC/BCC fields? etc.

just trying to see what possibilities are there.

Not currently, but that’s a great idea!

What we can do is to provide a way for the “System” app to emit a system webhook instant trigger instead of (or optionally in addition to, via some setting) sending the alert email, on a per-account basis so you could handle alerts in any desired manner via automation logic.

System-level webhook triggers are typically fired for any account in the system. So you could just have a single automation to handle all alert processing for all accounts in your system if desired.

Would that work for you?

that could work. hypothetically per alert, webhook to an automation to write some key values to store, then later retrieve all of them, sort/manipulate/etc, and create a formatted email as needed.

We can build two types of system webhook triggers, one that would fire for all alerts immediately as they occur, another trigger that would mirror the alert email behavior in terms of aggregated content and delivery timing based on account settings (e.g. immediately, hourly, daily).

The first trigger I described would let you do your own filtering and aggregation.

In the next system release, you will be able to configure accounts to never receive alert emails: 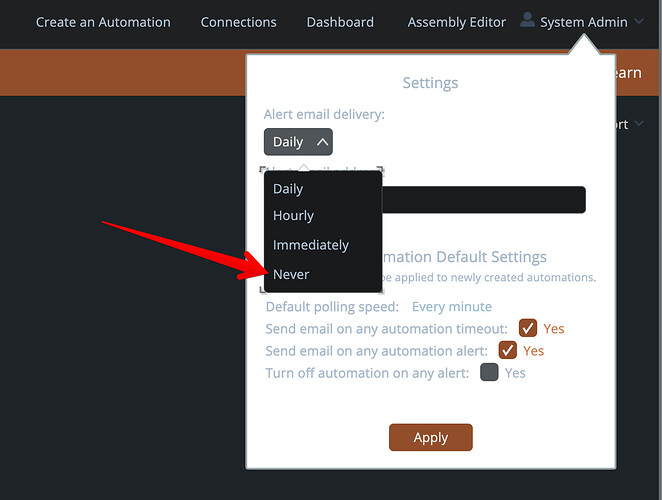 Plus, the System app will have a new “Automation alert in any account” instant trigger that will let you build automation logic to perform your own desired alert handling.

The new system release has been installed to your servers.

On your main server, the System app’s new “Automation alert in any account” instant trigger has been shared with the “AVT Connect” account.

Let us know if you need help with your custom alert email processing!